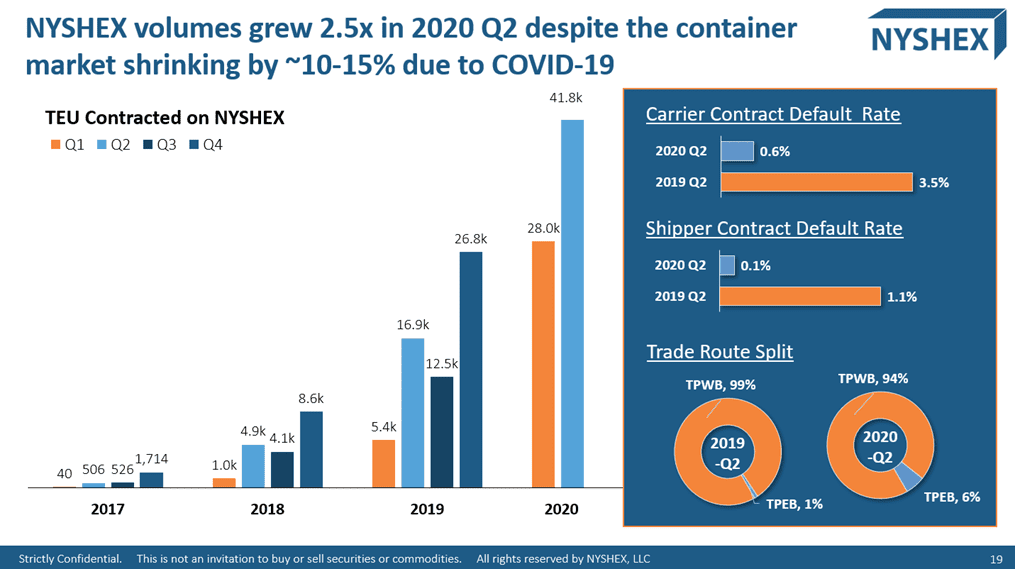 I spend a lot of time attending webinars, reading industry social media, and speaking with shippers to maintain a pulse on the industry. I’ve observed three main trends that everyone in the industry seems to be talking about right now. Though it may not seem so, the rudder just might be starting to turn the ship in a much better direction.

Trend 1: Carriers have and will continue to exercise discipline in capacity management.

It’s no secret that carriers have managed their capacity extremely well during the COVID-19 pandemic. With 400 sailings cut in April and May, and 10% of the global container ship fleet idled, carriers focused all their efforts on matching supply with demand. As a result, rates doubled vs last year and the forecast $4Bn deficit has been reversed to $9Bn operational profit expected for carriers FY2020. Shippers see that for the foreseeable future, carriers will continue to operate as lean a network as possible in order to maximize revenue. In fact, IHSMarkit reported this week to expect only 65% of expected new-build deliveries to materialize in 2021. The age-old race to be the biggest has been indefinitely canceled.

On the flip side, industry expert and CEO of SeaIntelligence, Lars Jensen, recently opined,“resilience in a supply chain also means – by necessity – that there has to be overcapacity. The industry needs to come to grips with what level of resilience is necessary, and how to pay for it.”

Trend 2: The value of the long-term service contract is in question.

A Drewry report conducted in April said that 83% of shippers had their cargo rolled this year, and as much as 20% of Asian exports were rolled as capacity was pulled.

During the JOC webinar “Midyear Container Shipping Outlook A Peak Season Like No Other,” the President of a global NVOCC lamented that “despite paying FAK pricing, your cargo is subject to roll at least one week and we’ve seen cargo rolled as much as two times in a row. When spot is below contract you get all the space you need, but when the market swings and FAK is 2X contract rates, you only get a percentage of your allocation.”

On the same webinar, the VP of Supply Chain for the National Retail Federation, Jonathan Gold, explained that when contracts fail,“retailers look at the cost on a per unit basis and when rates are 2X contract, there’s no way of passing on that additional cost to the customer.”

According to Cas Pouderoyen, Head of Ocean Freight at Agility, around 80% of shippers feel they have to pay premiums of $400 to $500 per container on the deep sea trades or their “cargo will be left sitting four to five weeks.”

Steve Ferreira, Founder and CEO of Ocean Audit, Inc boldly predicts,“Ocean service contracts are going to be wiped out as we know them. Look for only short term 3 month contracts to be the new norm. Carriers are done with long term deals… This is capacity management driven. The carriers didn’t know they had practiced this on paper so much, that when they implemented it during Covid, it worked, it really worked.”

On the aforementioned JOC panel, Mr Gold from the NRF shared success in maintaining cargo fluidity throughout these challenging months via carriers’ priority programs which include two-way commitments. “If your cargo is moving on a priority program, it’s not rolled,” he said. This is because when there are associated penalties for rolling your cargo, there are incentives and internal operational processes implemented by your carrier to prioritize it.

With nearly all carriers now offering digital quotes, and several offering guaranteed, priority programs, this vision began years ago but the concept is catching on with shippers. In fact, one carrier reports that over 3,000 shippers are regularly utilizing their guaranteed program.

At NYSHEX, we too can attest to the uptick in shippers demanding guarantees. Despite the volatility this past quarter, volumes contracted on NYSHEX soared to new levels while defaults plummeted.

Without mutual and unbiased enforceability for both shipper and carrier, the vicious cycle continues.

COVID isn’t the first, nor the last time we’ll see capacity withdrawn and traditional service contract cargo deprioritized. There is no better risk mitigation strategy than a fixed rate, a <0.6% chance get rolled, and compensation if you are. In case your doubts remain, here are just a few more reasons to give NYSHEX another look.

1) NYSHEX shipments are prioritized by carriers.
2) The rules on NYSHEX are standard for all carriers, and transparent.
2) In the <1% of exceptions that occur, the ruling is unbiased.
3) All payouts due to any NYSHEX member are 100% guaranteed!

Learn more about a customized, guaranteed contract to mitigate your supply chain risk here, or create your free account today and see for yourself!