A Quick Guide to the NYSHEX Forward Contract

Over the last year a lot has been written about who and what NYSHEX is and what container shipping problems NYSHEX is addressing through industry collaboration. There has been a lot of great press coverage from the JOC, a cover story in American Shipper’s February 2017 issue, and more recently Gordon Downes, NYSHEX CEO, was featured on MSNBC’s SquawkBox. NYSHEX has been called a marketplace and a digital freight forwarder, a bidding site and a booking platform. NYSHEX is none of these.

An over-the-counter (OTC) exchange where BCOs and NVOCCs can contract directly with Ocean Carriers in a manner which reduces counterparty risk. This is done via the NYSHEX Forward Contract™.

The NYSHEX Forward Contract™ is compliant with all relevant governing bodies and digitally filed and confirmed in real-time. It is fully enforceable, meaning that both contract parties are incentivized to deliver what has been agreed to in the standard contract terms. NYSHEX technology monitors contract compliance; If one party does not honor their commitment, the exchange collects liquidated damages and distributes them to the other.

With the NYSHEX Forward Contract™, BCOs and NVOCCs lock in rates for a specific week up to 6 months in the future. The locked-in rate includes all mandatory charges, and is not subject to change in any way. For members of the exchange the exposure to rate volatility is dramatically reduced while their ability to control costs is improved. And for the first time they have forward visibility to their cost picture.

The NYSHEX Forward Contract™ is a third option.

Current members of the exchange have cited many benefits. These include increases in work efficiency, greater data accuracy, and the opportunity to capture cost savings when the market fluctuates. Here is how the NYSHEX Forward Contract™ compares to the existing options: 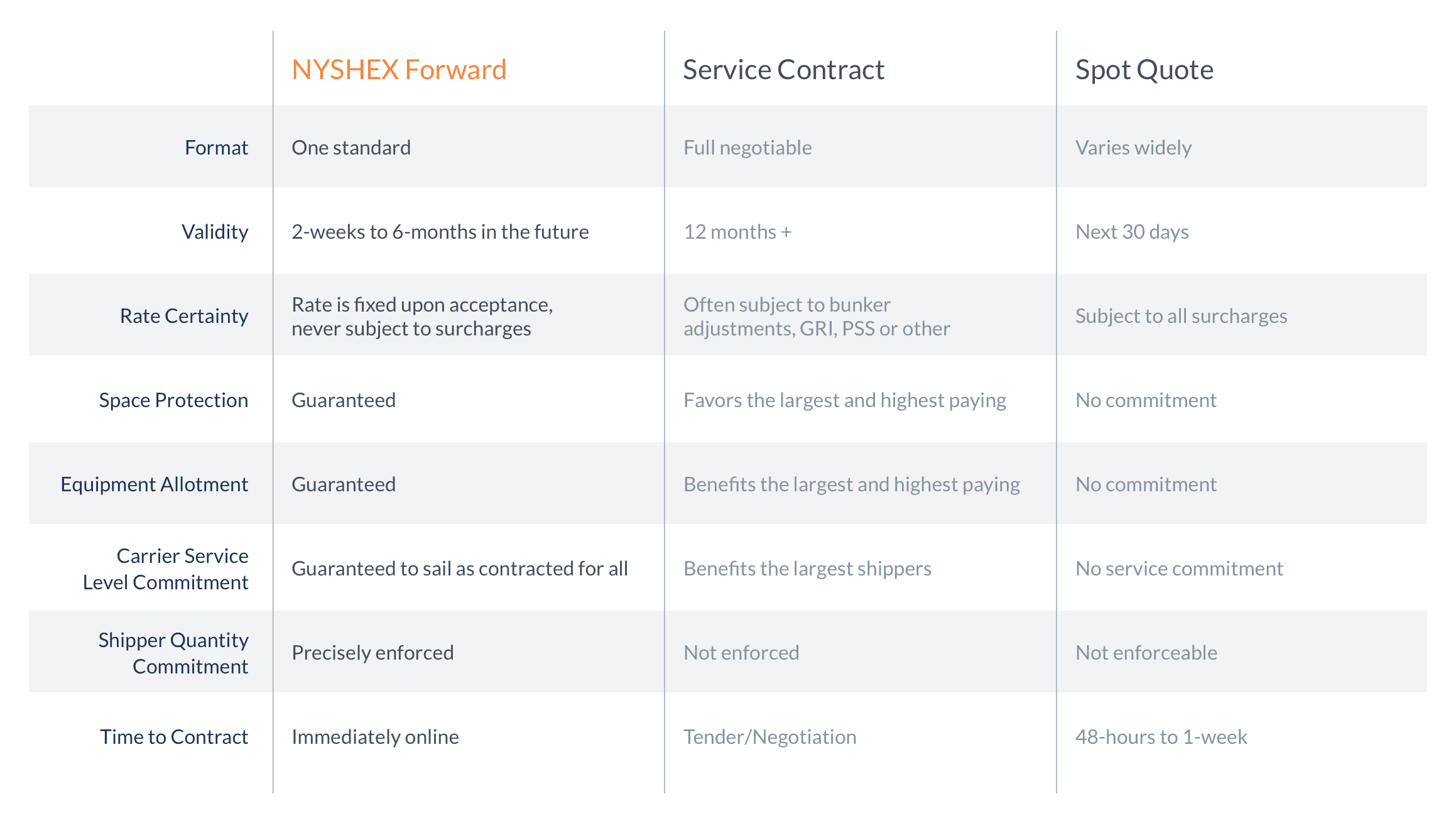 Forward contracts are not a new idea, but they are for container shipping.

Exchanges and the forward contract are not new ideas. They have been around for over 400 years and have brought stability to markets as diverse as coffee and carbon credits.

Put it in perspective: containerization is only 62 years old and the spot market didn’t really get its start until the mid-1990s. The NYSHEX Forward Contract™ is an evolutionary step in the growth and maturation of the global container shipping market. Ocean Carriers, BCOs, NVOCCs alike all stand to benefit.

The best way to learn more about The NYSHEX Forward Contract™ is to see it in action.